I saw this movie, let's see ... on Friday two weeks ago, in the basement at Klingenberg. Me and Anéa. She'd read a lot about the movie beforehand and I'd read hardly anything ... all I really knew was that it's by Eastwood, and that's enough for me. :-) Anéa had heard a lot of both good and bad about it, so she was curious to see for herself. We were both quite impressed and enjoyed the movie a lot.

Basic story: This based-on-a-true-story movie is set in Los Angeles in the 1920s. Our heroine is Christine Collins, a single mother who feels she works a little bit too much, but what can she do. One day she has to take an extra shift on short notice, and she leaves her ten-year-old son Walter home alone. This normally wouldn't be a problem. But something happens on that day. When she gets back home, the boy is gone without a trace. The police aren't falling over themselves to help, but a popular radio preacher takes an interest in the case. Months go by and the case becomes very high-profile ... and one day the police announce that the child has been recovered. Collins is ecstatic at the news. But on being reunited with the boy, her joy is soon quenched ... because this is not her child. :-o

The boy, however, insists that he is the lost Walter Collins, and the police eagerly support his story. (To the LAPD of the time, this was a rare opportunity to show off some success and to show the general public that they really knew what they were doing.) The case is closed as far as they're concerned. But Collins refuses to let it die a quiet death in police archives, because she knows that the boy she has been given is not her son. Walter is still out there somewhere, and she can't give up. However, the LAPD is a powerful enemy, and they are not about to let one woman ruin their rare moment in the sun. They have ways to shut you up. Fortunately, Collins also has some friends on her side.

Does the truth eventually come to light? Is the boy Walter Collins, or isn't he? And if he's not, what happened to the real Walter? Go see this movie and find out, it's wonderful. :-) A great historical drama, full of emotion, but not overblown. Another great piece of work from Eastwood. Some very good performances, especially by Angelina Jolie who really impressed both Anéa and me in this movie. The recreation of 1920s California is very well done and very convincing. I love period movies and this was an excellent one. Almost everything really came together. Also a very good script (by J. Michael Straczynski of Babylon 5 fame) that holds the audience's interest throughout without ever getting what you might call fast-paced ... a very convincing depiction of the period, in many ways. :-)

There's really only one tiny little detail that's wrong with this movie ... and that's the use of the term serial killer in a scene from the 1930s. Um, what?? That term was not coined until the 1970s, when the concept of the serial killer - as opposed to the mass murderer - was developed by profilers at the FBI. Specifically by Mr Robert Ressler. It may be just me, although I certainly don't hope so, but this seemed like too obvious an anachronism to slip by in such a big production, I was quite surprised by it.

All in all a very good movie that I heartily recommend. Moving and sad, and a wonderful portrayal of a piece of American history. Clint Eastwood rocks. :-) 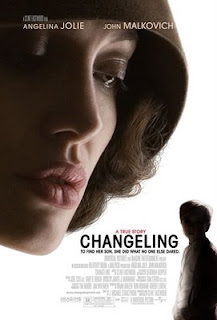 Email ThisBlogThis!Share to TwitterShare to FacebookShare to Pinterest
labels: movies

I loved this movie!

Juat watched it the other day.....it was quite good, despite being around 20 min. or so too long.

Yeah, it was absolutely up to the high standards that I expect from Eastwood.

Lemmy, thanks for stopping by ... I actually didn't feel like it was too long, although I did think some scenes were rather repetitive. Just a few though ... and all good ones, so I didn't really mind it. ;-)

John Malkovich I am not a fan of - quite the opposite - but I absolutely cannot explain why. I can see that he's good, I mean I can perceive it objectively I just can't appreciate it emotionally. If that makes sense. :-)