Some good, some bad. Mr Jack - I played Jack, and Dr Gull was the killer, I almost got away, but alas, not quite. 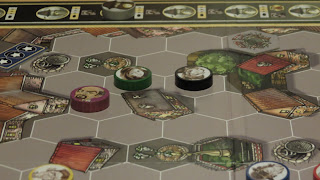 Piece o' Cake. We like a bit of cake! I am soo glad I bought this game. But I forgot to take a picture. o_O

Cartagena - let's say the results were uneven and perhaps leave it at that. ;-) 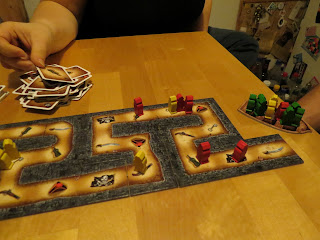 We decided to try some of the old games I've got sitting on the shelves here, the ones that have never been played ... with most of these I suspect they're garbage, but here they are, and we should at least try them before I put them away in the basement or wherever. We managed to at least try to try playing two of them.

Buffy the Vampire Slayer - the board has a big picture of Sarah Michelle Gellar on it, so I was predisposed to like it. It may be a playable game with enough players, I can't really say. It's supposedly for two to eight players. OK ... but there are eight characters, five humans and three vampires, and the point of the game is basically for one side to defeat the other. Each player gets a character, the others are in the game as 'unowned' characters. We must have done something wrong - and I'm starting to think maybe I know what it was - because as far as we could tell it was pointless the way it ended up tonight. Basically one side wins when there are no opponents left. We each knew what character we were, and there are things you can do to figure out who the others are. We discovered pretty soon that I was Xander, Anne Ida was Willow and O. was Cordelia. So what was the point? We were all on the same side all along. So ... ? We're going to try it one more time when we're at least six players, so we can be sure that there are both vampires and humans among the active characters. But my hopes aren't all that high ... 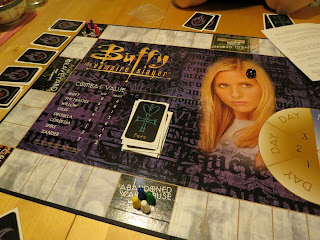 Angel. This at least looked much better. But it can't have been playtested much either. I don't think we'll be playing this again at all. You move cards around - this had us laughing a lot, so it wasn't all bad :-) - and the victory conditions are pretty much totally impossible to accomplish. It would take an absolutely ridiculous amount of time ... if it even could be done, which I don't think it could. This game looks good, but it's trash. Seriously total trash. 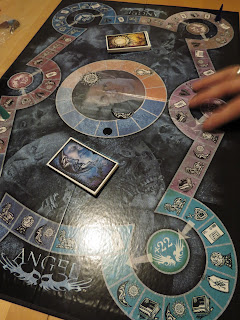 Finished off with Carcassonne, which basically can't ever go wrong. :-) 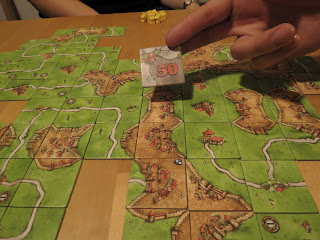