One of my resolutions for 2012 is to get back to having regular board game nights. So this year I'm going to host them twice a month, invite everyone on this mailing list I've set up and hopefully have fun playing with whoever shows up. Tonight was the first time. We ended up being six for most of the night, and got through, let me think, four games. Two of them twice. A good time was had by all, I think. So, the project is a success so far. :-)

Another thing I really want to do is to play all the games I have. I have some really seriously cool games that have been well considered purchases and have really been worth the price, but I do also have a bunch of more random buys *cough* that have just been sitting on a shelf for years and never been played. Some of those I'm almost completely sure totally suck, but hey, we gotta try them. Don't knock it till you try it. So every time we do this I'm going to force people to play one of these old clunkers and we'll see what we get out of it. Who knows, there may be some undiscovered gems in the pile too.

Cartagena, a quick game that's very easy to learn, hardly any rules. You construct the board yourself from a bunch of loose pieces, so it's different every time. The players take the parts of pirates escaping from the supposedly impregnable fortress of Cartagena. (This really happened in 1672.) One of the games I got on Thursday. Definitely a good buy, we'll be playing this again. We played it twice, once with open cards and once with concealed cards - both are possible under the rules of the game - we definitely preferred the latter.

Montgolfiere, one of my old games that we've never played. The players control hot air balloons and the aim is to fly to the moon. :-D You rise or fall by playing various cards, ballast of various weights, storms, etc. Another quick game, very straightforward, almost nothing to complicate it. Some opportunities for strategy but you have to play it a couple of times to get the hang of them. We played it twice tonight. Great artwork, I love hot air balloons.

The Pillars of the Earth, with the expansion set that lets six people play. Fantastic game, based on the novel of the same name by Ken Follett. (Still haven't read that, but will one day. :-) The players build a cathedral, using workers, resources, craftsmen etc. A lot of pieces and rather daunting to look at, but once you start playing you quickly get the hang of it. Takes a while, but worth it. Fantastic game.

Rattus, with some cards from the Pied Piper expansion and also the Jester bonus card that was made especially for BoardGameGeek.com. This is such a cool game. Europe in the mid-fourteenth century - rats are spreading the Black Death and the players try to keep their populations alive (forget about stable!) as best they can. Various characters help out, they give you abilities that can help you but are also potential liabilities when the plague strikes. We played once, had fun with the characters we used, but since you only use a few at a time we need to play this a lot more with the various new characters to figure them all out. We selected the six character cards at random and added the Jester. 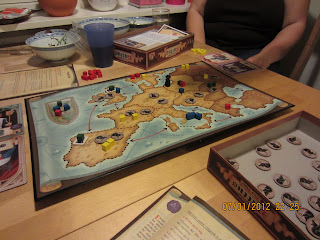