Cartagena. Fun again. I probably shouldn't be admitting this, but I totally prefer this game Jamaica style, with concealed cards. I'm just not a strategist, I'm in it for the laughs. :-) O. won this one. :-) 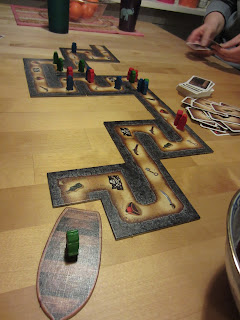 Piece o' Cake. A new acquisition that we tried for the first time. When I first came across this game I thought it looked pretty silly, but then I thought ... cake. I do like a bit of cake. ;-) So after reading up on it, I bought it, and yeah, it's as much fun as I thought it would be. Very easy to learn and a lot of fun to play - who doesn't like cake?? I won, Tanumine lost, but she would have come second if I hadn't accidentally tricked her so she scored ten points less than we thought she would. I'm so sorry ... !! I don't know what I was thinking ... ! o_O 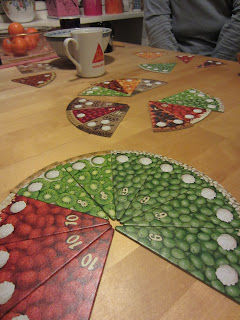 Ticket to Ride - the Card Game. Ooh, the beautiful artwork ... !! Another game that was quick to learn, although it took me a little while to figure out the rail yard/on the track thing. In the board game version it's visualized with the train pieces, but here it's all done with cards ... obviously. :-) I won this one, I managed to complete all of my ten tickets, I could hardly believe it myself. :-) 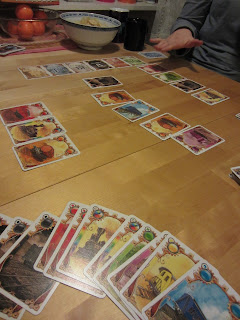