I always have a list of games that I'm thinking about getting hold of, and when an opportunity presents itself of getting hold of them at a bargain price ... I seriously consider it. :-) KAS was kind enough to pick up two such bargains for me and I got them tonight when we went to the movies together - Shame, by Steve McQueen. I hardly know what I think of that one yet. But I know that I look forward to trying these games. :-)

Habitat, a card game where each player tries to put together a functioning ... well, habitat, with different animal groups and resources. 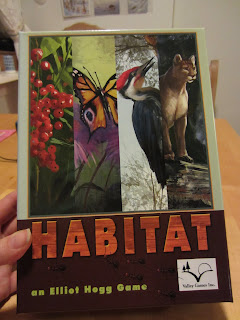 Blue Moon City, a sequel to a card game I've never played, but supposedly actually better than the first. Or so some people think. It's by Reiner Knizia so I'm sure it's cool. :-) The pieces are wonderful. There are dragons. Yay for dragons!! :-) 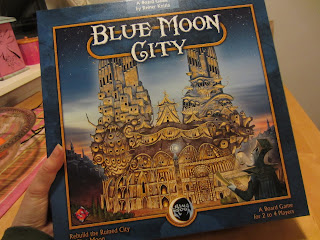 Email ThisBlogThis!Share to TwitterShare to FacebookShare to Pinterest
labels: board games