Little house in the big woods

Well, I'm not sure it's exactly the big woods. You don't have to go very far to hit a main road. Then again, it is Värmland. :-) There's nothing much except the road. ;-)
My mother bought a house in Sweden this summer, much to the distress of my father at the time, but now he's fixing it up like a champ. Even doing lots of stuff that nobody's asking him to do ... and loving it like I knew he would. ;-) It's already very charming but I think it's got a lot of improvements ahead of it still. I totally love the place, I can't tell you why exactly but I just love being there. I jump at every chance to go. Like this weekend ... my mother's in Copenhagen, but my father was going to Sweden, so I asked to go with him. Of course he was thrilled at the idea.
Now, I totally accept that he was primarily happy to have company. And especially that of his only child. However, it was certainly very convenient that he also wouldn't have to cook dinner for himself, since naturally I would be doing that. I'm a woman, so ... Right? I put this to him and he denied the charges, of course not, anyone who feels like it can do the cooking, he wasn't thinking about that at all. I pretended to believe him. This was on Friday.
Then yesterday - by which time he had clearly forgotten the details of our conversation - he came in from doing some work on the property, I was sitting in my room reading, in my new* chair. I heard him opening the front door, this was about 1pm ... and I heard him call out, Leisha? Are you going to make me some lunch?
Sure, anyone can cook who feels like it! :-D
Here's our little house, isn't it pretty. And soo Swedish-looking. ;-) 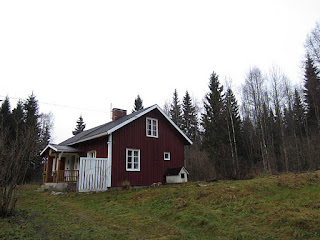 *I say new, what I mean is that I kind of rescued it from the dump. But it's new to me ... and totally comfortable. Free stuff, yay!
posted by Leisha Camden . 8:44 PM

Email ThisBlogThis!Share to TwitterShare to FacebookShare to Pinterest
labels: sweden