Want to get a good laugh?

Then you really can't beat live theater at its best. Sure, movies can be tremendously funny too, but IMO there's really nothing to beat live theater when it's done just right. And right now here in Oslo you have the chance to see something that is exactly right. :-)
Anyone remember Mysteriet Myrna Vep? It was produced for the first, or was it second, time in Norway right here in town in 1996, starring the fantastically comical pair of Anders Hatlo and Johannes Joner, and it was absolutely beyond brilliant. I went to see it three times and I laughed till it hurt every time. Now it's on again - opened a month ago - this time starring Simon Andersen and Stig Werner-Moe. The former I'm sure will be fantastic; the latter I have never seen in anything, but the reviews indicate that the casting is right on the money this time too.

The Mystery of Irma Vep is a brilliant play for two actors. They must be either both male or both female; this is stipulated in the performance rights. There are seven characters; crossdressing is inevitable and costume changes extremely frequent and very impressive. Each actor needs his or her own highly skilled dresser, who are almost as important to the play's success as the actors. The play, which was written by the American playwright Charles Ludlam in the early 80s, is on the face of it a gothic horror mystery, but it's really a totally wacky comedy. If you can see this play without laughing, you must be dead.
The current production will run at Centralteatret through December 17th. I'm going to see it tomorrow night. I am SO excited that I can hardly wait. We've had our tickets since August and now we are practically swooning with excitement. One more day ... !! :-o 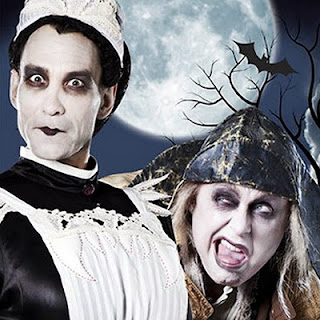 Email ThisBlogThis!Share to TwitterShare to FacebookShare to Pinterest
labels: theater