Some of you may remember my friend N. that I've mentioned on the blog a few times. He's my friend Calyx*'s husband. He's an industrial designer and works for a company called Abyssus Marine Services ... they 'solve operational challenges subsea and onboard'. I'd be lying if I said I entirely understood it. :-) He's in charge of product development. One of the products he's developed :-) is a deepwater sensor called Case Abyss, which was nominated for Norway's most prestigious design award, the Honororary Prize for Good Design, which is awarded by the Norwegian Design Council. Very fancy. And guess what, it won!! Woot!! Fantastic!! :-D You can see him in Dagbladet online here ... he's pictured with Sylvia Brustad, Secretary of the Department of Commerce (ooh), but unfortunately not with the thingummy that he won the award for! o_O Dagbladet is full of stupid people. >:-( I guess they'll fix it eventually, but you can see the product and read about it (in Norwegian) here ... if that's your type of thing. :-)

I think this is wonderful and I'm very proud. :-) I think of it as a small poke in the eye of those of my fellow citizens who say that immigrants never amount to anything. ;-)

Here is an undignified photo of the winner from a board game night at my house a few weeks ago. I'm sorry, N., but it's such a great picture, I just couldn't resist posting it. ;-) Congratulations, I'm so happy for you!! :-) 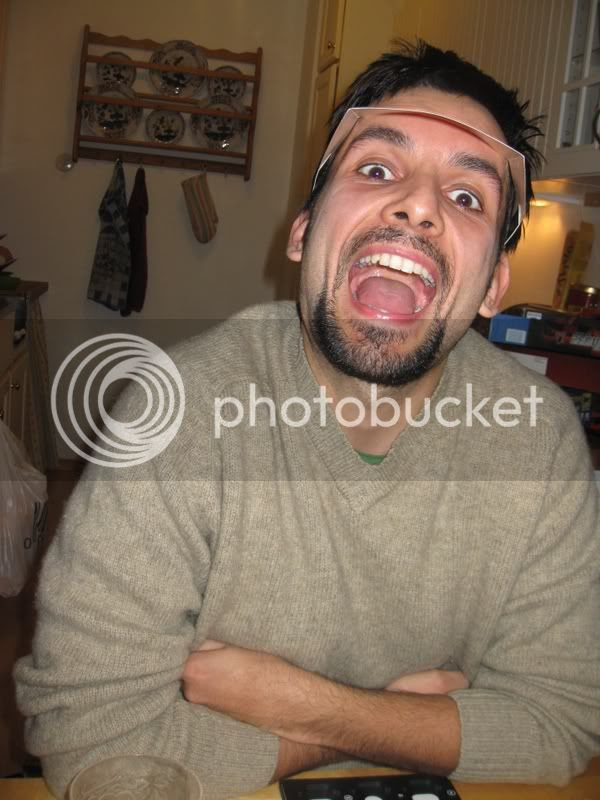 Update: The article is supposed to be updated with the right picture now.

Update again: It seems I got the wrong end of the stick. The picture in the article is the right one ... and has been all along. It was the picture on the virtual front page that was wrong. o_O See, I told you I didn't understand this ... !! :-D That doesn't take away the happy, though. :-)

* or NyxRo as I've sometimes called her, before she started her own blog. :-)
posted by Leisha Camden . 1:51 PM

Thank you dear! We're having a great time - so much fun. Finally, all that hard work paid off! The designer laughed a lot at his portrait ;)

Big hug to you too, and congrats again. :-) I'm glad he liked the picture. I didn't think he'd mind me using that one, but you never know, now that he's an award-winning designer and all, he might have gotten airs ... ;-)

Have a great weekend, I'll talk to you next week!!

Oh, and I almost forgot - KAS and trilltrall and my mother all say hello and congratulations!! :-D

he he your litle blog :) makes people happy write about hings that take up your mind :-)

I don't understand if this is a slam or praise. o_O

If you don't care about the things that I post about on this blog, then the solution to your problem would seem to be very simple indeed ...