I am soo sick of all this snow now. This has been a record winter in Oslo ... we haven't had this much snow since 1987. And we still have a hell of a lot of it, even though March is the first month of spring ... supposedly. At Tveita where I live there is so much snow ... !! Snow everywhere. On the parking lot by Tveita mall there are piles of the stuff two meters tall. At least. The footpaths are clear of it - mostly - and the gravel field is too, but that's it. The astroturf field is usable, but only because the snow has been cleared from it so that it's been planed. It's still completely white. I know, snow looks nice, but it's almost April ... !! I'm sick of winter and snow, I want spring! I want flowers! I know, I saw spring flowers in Warsaw ... but I don't really count those. Spring in Warsaw, what good does that do me? I want flowers here!! I was so happy on Thursday ... KAS texted me to say that she'd seen coltsfoot from the bus :-) on her way home from work and when I got home, there were crocus (crocuses??) blossoming in the flower beds along the front of my building. Oh, happy day ... !! Here's how it looked: 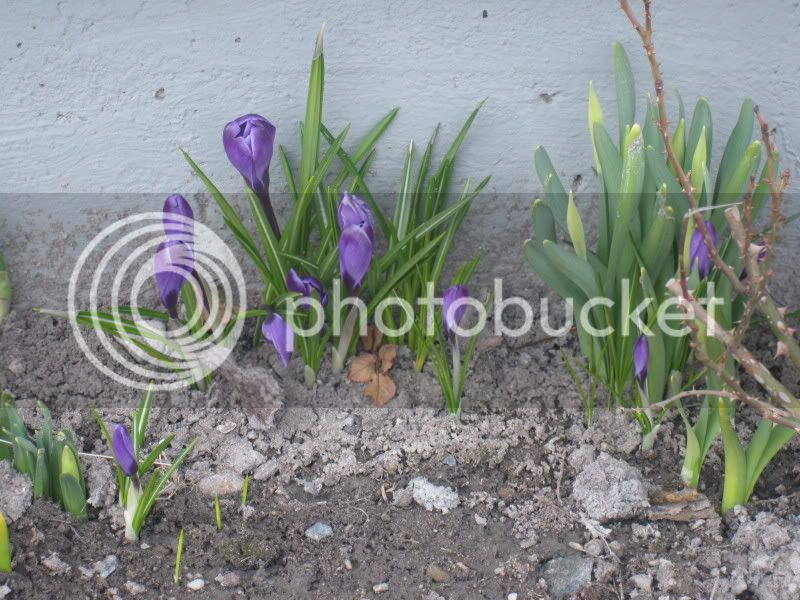 The snow was quite close still, but receding, receding ... 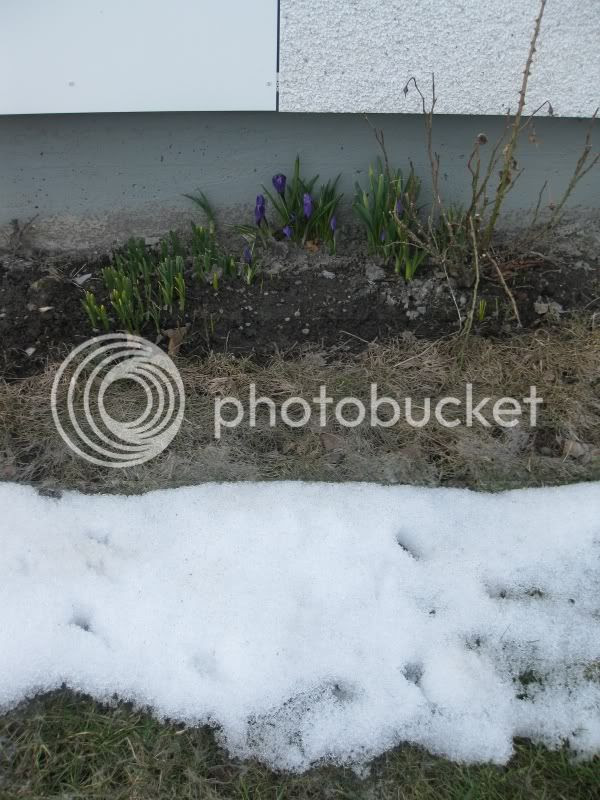 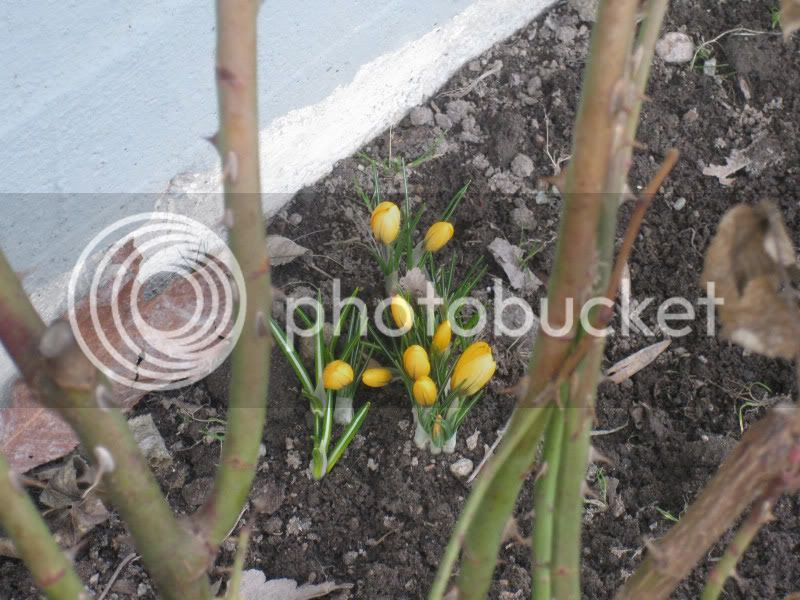 I was so happy to think of spring being here. Crocus is a wonderful sign of spring ... it's not the same as wildflowers, but they are spring flowers all the same. I was so happy to have seen them. Then I woke up on Friday morning, and ... not so happy. >:-( It had snowed for hours already by the time I left and it went on snowing for most of the day. We had to shovel it away from the entrance at work twice during the day. >:-( This is what it looked like when I got home that afternoon: 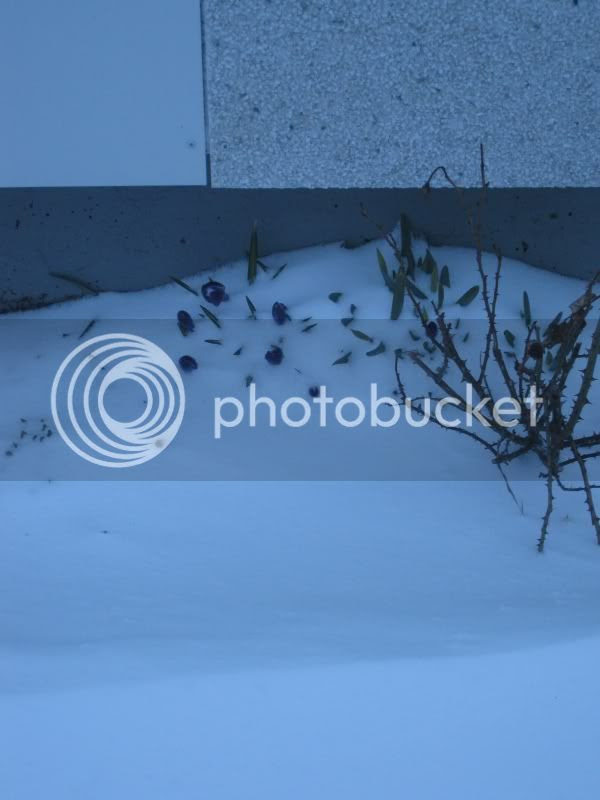 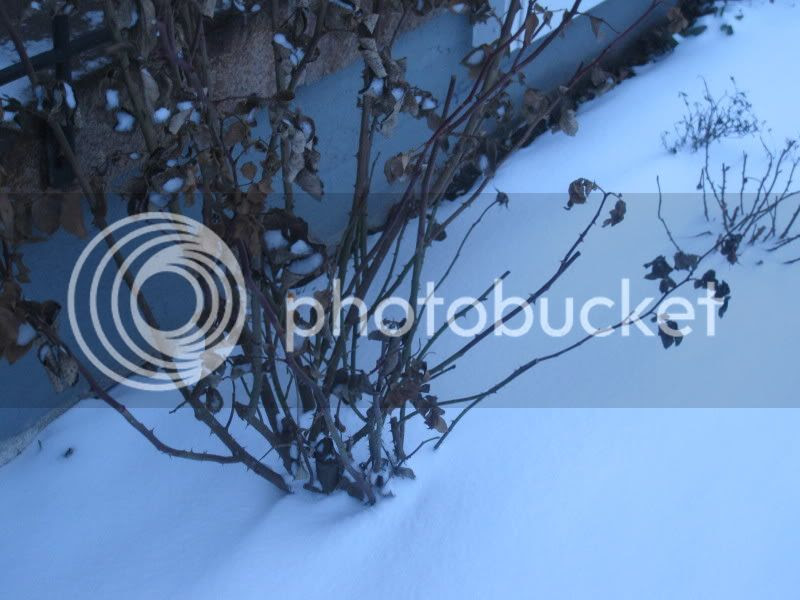 Bwaaah ... !!! My pretty flowers. :-( They seem alright now though, the snow has already melted off them and they're none the worse for wear. But it was a depressing Friday. :-( Today the weather's been nice ... partly sunny and ... not exactly warm, but definitely a spring temperature. So things are looking up again. And how! Get this. Anne Ida and I went to a couple of flea markets today, and on the way home we spotted this on the stairs up to the platform in Blindern subway station: 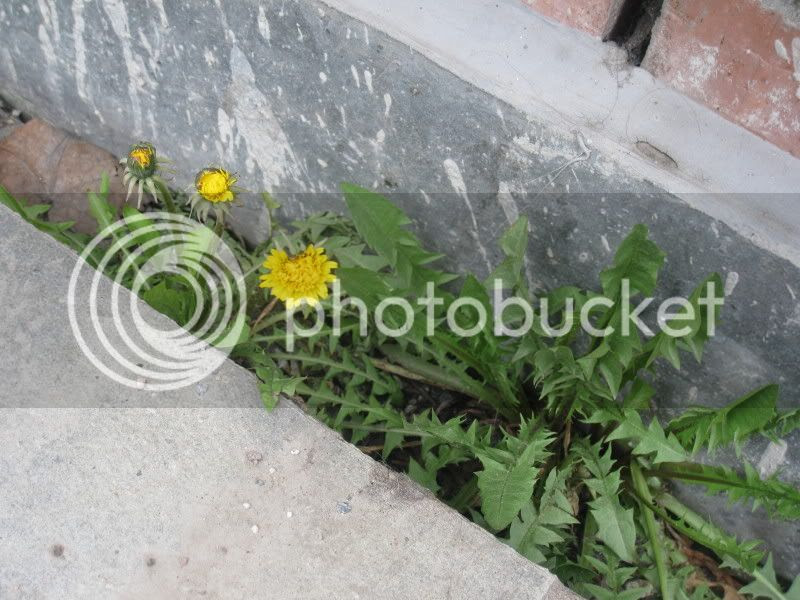 I know, WTF?? Dandelions now?? In the weather we've been having? I haven't even seen so much as a potential hint of a coltsfoot. But dandelions, sure, why not. :-D It's freaky, I know, and I guess I should be worried, but I'm just so happy to have seen a real flower. A spring flower or a summer flower or whatever. A wild one blossoming entirely on its own reconnaissance.

Update, Sunday: It turned out that I lied. The gravel field is covered with snow too now. It was clear on Thursday, but alas, the snowfall on Friday covered it up again. There were kids playing football* there on Saturday afternoon, though, even so. Kudos. :-)

Email ThisBlogThis!Share to TwitterShare to FacebookShare to Pinterest
labels: photo

I love flowers! They are beautiful and give us oxygen and remind me that we are alive. I'm glad you got to see dandelions, and I'm sorry about your crocuses (yes, crocuses, I looked it up in dictionary.com :)). I hope the snow stops soon! It's already stopped where I live, and now we are enjoying some weak sunlight that is precious because it is sunlight. I wish I was in a warmer place now though, where there is real sunlight. Oh well, at least we don't have snow, right? :)

I love the crocuses. I never knew they came in yellow until today when I saw a yard full of purple and yellow ones. I only have light purple, dark purple and white. My daffys are open now and I love it. Hyacinths are on they way up and they are my favs. Tulips leaves are all up but no flowers yet. We still haven't seen our last blast of winter yet so I am trying not get to excited about spring. It was a balmy 60 degrees here today and everyone was out. Knock on wood, maybe this year we don't get the freak Easter snow storm like we usually do. Here's to spring!

Excellent post! I haven't found any flowers yet - we are just drowning in snow. Am counting the days until we go away to spring - apparently we'll have 15-18 degrees celsius. Hopefully the snow will all be gone when we return...This is really enough! Are you planning to go skiing? :)

Margo: I love flowers too, especially spring ones, they're such a sign of life returning after the winter. I'm hoping we won't get any more snowfalls now, and with every sunny day more of what's already here is melting away. I'm so sick of it ... but if it wasn't for the winter, I wouldn't get to be so happy about spring. :-)

kccat: I agree, hyacinths are fantastic. I just love that smell, it's amazing. Yes, here's to spring! Easter storms, stay away!! :-)

Calyx: After seeing your yard on Sunday, I can believe that you haven't seen any spring flowers yet ... !! :-D I think I may have to post those pictures I took. You guys are almost snowed in, still. :-D I think it will be gone by the time you get back ... I mean, it's April, it can't get worse now. Or if it does, only very briefly. As for me skiing, bwahaha ... !! You're joking, right? :-D