I had such a wonderful day yesterday. :-) Absolutely a wonderful day. First I got to sleep in ... not as long as I normally would, but I went to bed kind of early on Friday - that is, early for a Friday ;-) - so it evened out. Then I went downtown to meet my best friend C., we went shopping ... but just a little, enough to be fun, but not enough to be exhausting. I bought a couple of DVDs, something useful at Clas Ohlson, and some Muji stuff at Åhlens - some socks for myself, a fun little present for AudiX78 (but you'll have to wait till May to find out what it is, Audi ... ! ;-) and an adorable soft toy turtle that I absolutely do not need, but it was just too cute to pass up. And soft and cuddly. :-) Then we went to Bristol for a cup of their amazing hot chocolate in the Winter Garden, and then to the Cinematheque to see one of my all-time favorite movies, The Sound of Music, at the 70mm festival. Do you mean to tell me, fräulein, that my children have been running about all over Salzburg dressed in nothing but some old drapes!!?

Although I have seen this movie about 20 times (at least, I'm afraid ...), I had never really noticed before how ... gay, to be honest ... Christopher Plummer plays the Captain. Huh. An absolutely stellar performance, of course, but seriously weirder than I remembered. o_O

So, after being transported by the movie for three hours we were going to go our separate ways ... but first we just had to stop by Outland since C. had forgotten to bring a book to read on the train. We looked around for a while, and she decided on the first Ghatti book by Gayle Greeno. I haven't read those, I'll be curious to find out if they're good. I managed to not buy even one single book ... !! but I did buy a board game, so my willpower is not to be commended, alas. It's an investment though, because I picked a fantastic game, namely, Colosseum. It's big and heavy and expensive (but it had been marked down almost 100 crowns!!) but it's so worth it. A fantastic game, check it out if you're thinking of buying a new board game. It has lots of pieces and doodads but it's totally intuitive, very easy to learn and lots of fun. You play an impresario in ancient Rome putting on shows in the Amphitheatrum Flavium - hence the game's title - to impress the great Titus Caeasar and bring thousands flocking to your extravagant spectaculars!! Gladiators, lions, poets, musicians and priests will perform for you! Horses and chariots, the crews of famous ships will wow the crowds! Beautiful scenery and exotic plants will ... um ... they'll be there too! You'll earn gold and silver, you'll be showered in honors from the great Emperor and his Consuls and Senators! And you will be able to make an endless number of bad jokes! What's not to love about this game?? :-D

Anyway ... I've been wanting this game for a long time now; I guess it was only a matter of time before I broke down and bought it, even though it's so expensive. But you get a lot for your money, so ... I'm happy. As the title indicates. :-) But it got even better. After saying goodbye to C. at the train station I took the subway up to my friends K and Dag-Erling's house for board game night, where I got to play my new game only a couple of hours after buying it - yay. Me so lucky! I wish I'd taken a picture or two of the game in progress, but ... that's hindsight for you. It didn't occur to me till just now. o_O

But it doesn't end there! It was a wonderful day for more than one reason. As I said, I bought a couple of DVDs ... we went to Platekompaniet in Oslo City, and I'm sure you can guess what I was looking for ... but no such luck. They are totally against me!! I don't know why but they totally have it in for me. >:-( I bought Little Britain Abroad and Day Watch but they didn't have what I was really looking for. Sob!! :-( So then we walked up towards Åhlens, because C. wanted to look for something there that she'd seen in some magazine ... and to get there we passed by Playcom ... so I asked if we could just go in quickly just to check. Although hope was dying in my heart. But! Behold!! :-o 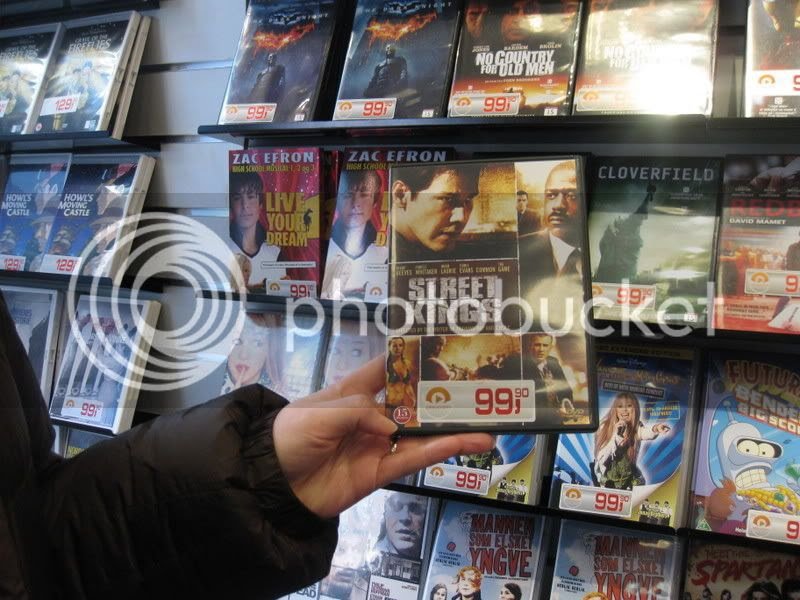 What, no Christians? What do the lions eat?

They eat gladiators ... these are available with various religious backgrounds.

That sounds like an INCREDIBLE day, glad it was so enjoyable!

It was a fantastic day, I don't know how it could have been better. The weather was wonderful, even. :-)