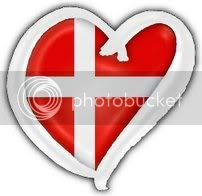 Denmark is a nation that generally sends such bland entries to the ESC that it's easy to forget that they have actually won twice. Most recently in 2000, when the Olsen Brothers (no relation to the Olsen Twins ;-) swept Europe with their charming exhortation to Fly on the Wings of Love. Now that song is just sweet ... and being performed by two middle-aged men playing guitars only made it more adorable. :-) Their first win was in 1963 (they have been participating since 1957) with the lovely Dansevise. Now that is one fine song. The melody is so sweet and the lyrics so poetic and beautiful. (You can read them here, in original and translation.) But apart from that they've mostly sent songs that are just ... meh. There's nothing wrong with the Danish entries, they're perfectly acceptable, they just aren't very memorable. They're quite alright but they don't have what it takes. That IMO - and I think it's an opinion many others share - is the general standard of Danish ESC entries.

And this year? The same procedure as last year. :-) This song is OK, but nothing special. An uptempo pop song with very standard lyrics and a pretty original melody. What can I say? There just isn't much to this song either way. I don't think it'll do either very badly or very well. It may get through from the semi (they're in the same semi as us) but its results, I predict, will be middling. The singer is OK ... I don't know what to think about his voice, it's kind of unusual. I don't know if I like or dislike it. But he's just a thirteen-to-the-dozen singer that we always see a bunch of in the ESC. I don't understand what the Danish audience perceived as so special about this song that the international audience will remember it. This song is a lot like the UK entry last year ... and look how that went. >:-) There are 42 countries participating this year (since Georgia's been disqualified, alas) ... a song that's just fine but nothing special doesn't stand a chance.

Take a look - this is Niels Brinck performing Believe Again, which is written & composed by Lars Halvor Jensen, Martin Michael Larsson and, get this, Ronan Keating. :-o They will be competing for Denmark on May 14th.

Nothing special as you said!
I think it will be in the final though.

You were right! We were all surprised to see that. Damn those jury groups. :-)