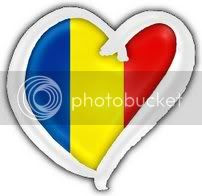 Romania has been participating in the ESC since 1993, with a couple of missed years here and there. Most of the time they haven't done very well. It took them three years to even qualify for the final. But in 2005 and 2006 they sent great songs and did very well indeed ... 3rd and 4th place respectively. I totally dig their 2005 entry. I was almost expecting to be tuning in to Bucharest in 2006 ... and IMO that would have been much more well deserved than the actual winner. But that's another story.

Their entry this year is a song about how Balkan girls like to party in awkward English. >:-) It will be performed by Elena Gheorghe, who, although quite young and unknown to the larger world, has been a professional singer for years, and has released several albums. As for the song, well ...

The intro's kind of intriguing, but as soon as the verse starts I'm just left scratching my head wondering where I've heard this before. The chorus is pretty catchy. At first, anyway. But the lyrics are embarrassing. For crowd delight, we'll shine all night ... ? Um, OK. The chorus gets kind of annoying towards the end and the performance is sort of ... slutty, or whatever ... but what do I expect. >:-) This is overall a pretty standard pop song that IMO doesn't meet international standards. I hope the performance will be better in Moscow. I don't understand at all that anyone can think of this as having serious chances. Turkey will totally crush this entry. ;-) By the standards Romania has set in recent years, this is a letdown.

But don't listen to me, judge for yourself. This is Elena Gheorghe performing The Balkan Girls by Laurenţiu Duţă, who's had help from Ovidiu Bistriceanu and Daris Mangal with the music and from Alexandru Pelin with the lyrics. They will be competing for Romania in the first semifinal, on May 12th.

Hm, I'm not into this song, have to agree with you.

It's just not good enough IMO. Especially since the Romanians have sent much much better songs in the past. It's not even that I don't like it personally - although I don't - I just don't think it's good enough to make it. But if they can make the performance more professional by May, who knows ... although I'm 100% sure we won't be going to Bucharest in 2010 either. (Almost a pity since I would have loved to see what kind of show the Romanians would put on. :-) Based on the songs I've heard so far, my guess is that Moscow 2009 will be a showdown between Norway and Turkey. But then again I have only heard about half the entries, so ... who knows. :-)

Now, this I don't like although I think it will be in the final.
This year with the juries voting I just can't predict anything for the final!

nona, you were right!! I was sure they wouldn't make it, but you were right. :-) The presentation was awful though, it had nothing to do with the song. They didn't deserve to be in the final IMO.

I totally agree about the new system, I found it really difficult to guess too.