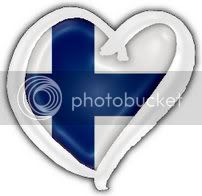 Finland will be represented in Moscow by a group that is actually an actual band, although IMO they don't necessarily sound like one ... Waldo's People, with the dancey pop song Lose Control. The entry was chosen on January 31st (I know, I am soo behind ... but there's still a while to go till May :-) and it will be competing against 18 other songs in the first semifinal on May 12th.

Finland doesn't have a very illustrious ESC history ... in fact they have mostly wandered in the desert and have never seemed to really 'get' the formula. They competed for the first time in 1961, so no one can say they haven't tried. :-) They have a collection of four seventh places, but the last of those was in 1989 ... and from then till a couple of years ago they muddled about at the bottom and sent entry after entry that were variations on the same topic - depressing power ballads all too efficiently depicting the human condition in the Land of a Thousand Lakes ... darkness and cold and rampant alcoholism and all. In 2004 and 2005 they failed entirely to qualify for the final. As 2006 dawned cold and bright the best ESC results the Finns could present to the world was a 6th place in 1973. :-( But in Kyiv the contest had, somehow, really opened up. The variety of music presented was greater than ever before ... and some genres were represented that only a few short years previously no one would have believed they'd ever see on an ESC stage. Examples: The host country submitted a surprisingly political rap song (political statements are not allowed by ESC rules); Moldova, competing for the first time, sent an oddball rock entry, a standout for its huge drum played by one of the band members' grandmother (and they did very well); and Norway, memorably, had chosen glam rock as our genre and ended up in the top ten with a band whose lead singer wore black lipstick and pants so tight that you'll be able to tell what he had for breakfast (Terry Wogan). This latter entry proved a great inspiration for ... well, see for yourselves. 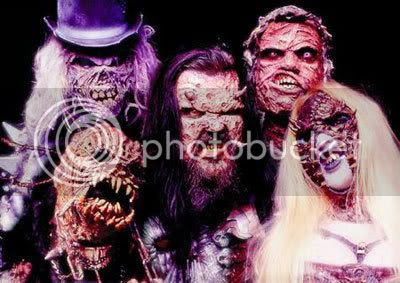 Yes, this is a serious band. Monsters can rock too.

For some reason, Tomi Putaansuu thinks that it's more fun to play music if you're dressed up to look completely hideous ... and look, his friends think so too. Their band Lordi has been going strong since 1996, and they have been getting up to all sorts of mischief, not least selling lots of records. They generally don't give interviews, because monsters can't talk (duh), and do their best to hide their, ahem, civilian identities. When they submitted an entry to the national ESC selections, they did a great and wonderful thing both for their country and for their careers.

Their victory in the national contest was hotly contested by a number of religious groups who decried the band as Satanic (although they failed, predictably, to refute Putaansuu/Mr Lordi's counterargument that a bunch of Satanists would probably be unlikely to release songs with titles such as The Devil is a Loser) and alleged that Finland would be disgraced before the entire civilized world if this entry was allowed on stage in Athens. (Certain Greek busibodies agreed with them.) Believe it or not, but some nutcases actually went so far as to demand that President Tarja Halonen use her presidential veto to stop the band's participation in the international final!! Which of course wasn't done, and would have been a blatant misuse of Ms Halonen's executive powers if it had been. >:-(

Anyway ... when the monsters did take the stage in Athens, Greece was among the countries that gave them its coveted twelve-pointer. (Norway did too, I'm happy to report. :-) Lordi completely crushed the competition, defeating Russia in second place with as much as 44 points, setting records in the process - their entry is to date the highest scoring ESC entry ever. It was also the first to win both the semifinal and the final ... to the extent that anyone can win the semifinal, but you know what I mean. :-) The Finnish song became, and I can only beg your pardon most humbly for the following awful pun, a monster hit practically all over Europe. My friends KAS and trilltrall went to Finland on their vacation the next summer, and they saw Lordi Coke in the stores there ... o_O

But, what am I doing, this entry isn't supposed to be about Lordi!! It's supposed to be about this year's entry! Which you can see below, sorry. :-D I don't like it much ... I thought I did a bit, at first, but it's very repetitive and has few or no surprising elements. It's relatively catchy but IMO gets annoying pretty soon since it's just the same thing over and over and over. I also am not impressed with their performance - it's almost surprising that they're a real professional band (and had some real hits some years ago) because they sound rather amateurish. The presentation also seems to have very little to do with the subject matter of the song. The official video's better ... but that's neither here nor there. I thought at first the Finns might do OK this year, but the more I think about it, and the more I hear the song, the more I doubt that conclusion. Kudos, though, for trying something completely different. :-)

This is Waldo's People performing Lose Control by ... meh, some of the band members and some other people (check the Diggiloo Thrush link at the bottom of the post). Who will be competing for Finland ... on May 12th, at least. >:-)

You can see the official video here, if you want to compare.

Ehh, this is a typical Eurovision song in a very good appearance order and I think it's going to pass in the final. I'm not sure I like it though!!!