Remember this from last month? How I was going to pick one photo from each month as my favorite and post it here? And how I said I wouldn't necessarily be able to say why whichever picture I picked was my favorite? Well ... here's that statement illustrated. :-)

I've taken a number of good pictures this month as we've had record snowfalls (the worst - or best, depending on who you ask - since 1987, apparently) and there's been lots of things around the city to take pictures of. And of course some beautiful sunsets and so on. But for some reason this is the one picture I've taken in February that I like the best. Click to enlarge. 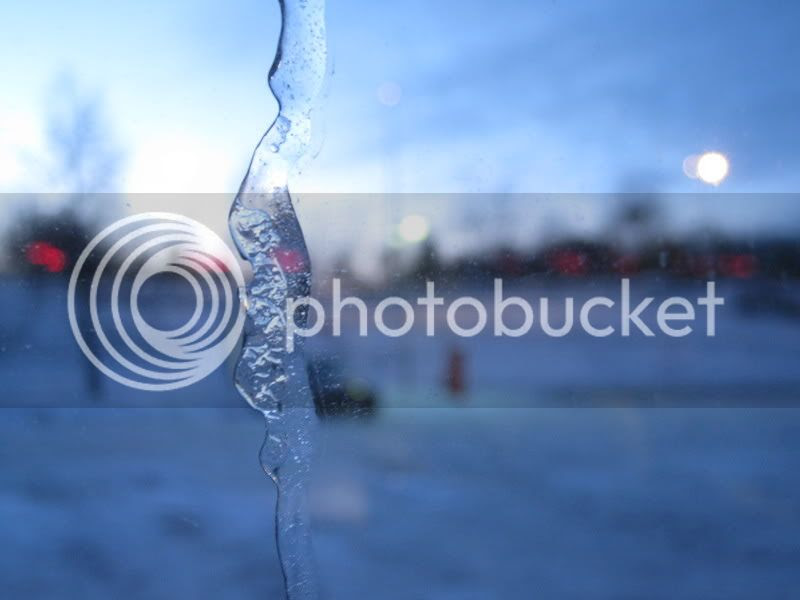 A pretty good macro if I do say so myself. Really not sure though why I like it so much ... maybe the colors. For some reason this image is quite beautiful to my eyes. :-) I'd love to hear what others think.

Background info ... the picture was taken through the window of a bus on line 59 here in Oslo one early morning. It was very cold ... as you can probably see, it's not water running down the window, it's something that was water at one point, while the bus was in its garage for the night, but froze to a strip of ice when it came time to leave the building and start the day's work in the wintry city. Poetic in a way, isn't it? :-) I normally wouldn't have seen this as I usually sit on the other side of the bus ... I always sit in the same seat if I possibly can, which I'm sure isn't entirely flattering to my mental health. But anyway ... that morning 'my' seat was taken, so I picked one across the aisle ... and got to see the first of the sunrise, which inspired me to get my camera out and take a couple of pictures.

I really don't know why I always sit on the other side.

Email ThisBlogThis!Share to TwitterShare to FacebookShare to Pinterest
labels: oslo, photo, picture of the month

g-d made you sit on the other side.

You are an idiot.

Don't get mad at me. God made me say it.

At least eight people were killed and seven Sri Lankan cricketers were wounded when a masked gang armed with Kalashnikovs, rocket launchers and grenades attacked the team bus and its security escort in Lahore.

Leisha--
About the picture, it is beautiful. I like the choice.
About this god fellow that people talk about: if everything they say about him is true, then he is one fucked up motherfucking piece of shit. Pardon the French; I don't know what made me use such foul language, I can only assume that it was God's plan.

I know ... god has some serious issues. He could probably really benefit from some anger management classes. Based on what I've heard.

What really boggles my mind about comments like faker's above is the enormous arrogance that such statements imply. That god, if he existed, would actually care which side of the bus some random irrelevant Scandinavian sat on one particular morning ... ??! I mean, how arrogant is it possible to get?? This overwhelming arrogance is IMO one of the most unappealing traits of religious people. And it certainly makes god sound incredibly petty and stupid. If it were true, though, it would explain an awful lot about the state of the world.

Thanks for the compliment on the picture. :-)