In our ongoing series Keanu Monday, we're happy to present an appearance by Mr Reeves on Rove, an Australian talk show, on which he appeared on April 13th, 2008, to promote his then latest movie, Street Kings. A fun interview with a relaxed Keanu, funny questions and an IMO great host. Enjoy. (Rose, you may already have seen this, but ... it's worth seeing again. :-)

In other news, today marks the 807th anniversary of the death of King Sverre Sigurdsson, one of the two Norwegians - both kings - who have ever single-handedly turned the course of our history. (The other one is King Haakon VII, whose reign included the pivotal year 1940.) If anyone would care to bring up any other person who has achieved this, be my guest - I'm talking about Norwegian history here, I don't want to get completely carried away - but I really can't think of anyone. King Sverre ruled from 1177 until his death in 1202 from stomach cancer at the supposed age of 52. He claimed to be the son of King Sigurd II the Mouth, an allegation that was entirely false, but that still carried the day for this master of PR, stellar tactician and all-around brainiac, and is still believed by many to this day. Through his actions, the Civil Wars lasted many decades longer than they would have otherwise, but he made up for it by founding a dynasty which produced some of the greatest kings Norway has ever known - Magnus VI the Lawmender must be mentioned, and above all his father, Sverre's grandson, Håkon IV Håkonsson. So ... you gotta take the good with the bad, I guess.

You'll notice that Sverre has no numeral after his name - he was the first king of Norway to bear this decidedly un-royal name, and no one has dreamed of using it after him. He gave the name a bad rep. However, in the event of some terrible tragedy, we may yet see a Sverre II on the Norwegian throne, as Crown Prince Haakon Magnus ill-advisedly named his second child after his own most unusual predecessor. Prince Sverre Magnus would in that sad event be well advised to use his second name, which is what the family call him anyway. But of course we all hope it will never come to that. o_O

This is King Sverre - who, incidentally, was the topic of my Master's degree paper way back when - pictured in stone in the Cathedral of Nidaros. He brought the Pope's gravest displeasure on his country and drove the bishops into exile, but ... time heals all ills. :-) 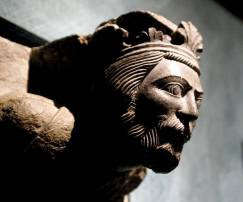 Loved the Keanu interview, and I learned a bit of Norwegian history, too!

Yeah, I dig this interview too. The back and forth between these two guys is so funny. -Can you do a Keanu Reeves impression? -Umm ... I'm doing one now! LOL!!

The story of Sverre's life really is one of the more fascinating in Norwegian history, I ought to write some more on that some time. It'd be not only educational, it'd be entertaining too. :-)