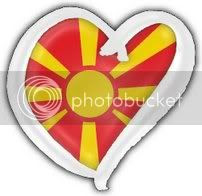 This is an entry I don't have much to say about. A standard rock song, easy to listen to, easy to forget. There's nothing wrong with it, but nothing special about it, either. It's fine, I have nothing against it, but it doesn't impress me either in any way. I don't think audiences will remember this song for very long ... they have a pretty good starting slot, #13, but even so I think they will have a hard time standing out with this entry. It's just too bland. Iceland will go on stage just before them with their beautiful ballad, and Romania right after with a song that I personally don't like much, but which is a great deal more catchy than this entry. So ... I don't think we'll see this in the final. Better luck next time. Duh.

Oh, lest I forget: Kudos for singing in Macedonian. :-)

This is Next Time performing Nešto što kje ostane by Damjan Lazarov, Jovan Jovanov and Elvir Mekić. They will be competing for FYR Macedonia on May 12th.

From the national selections: