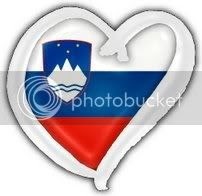 Ah, Slovenia ... ! Believe it or not, but this is actually one of my favorite countries in the ESC. In the years that I've been following the contest really closely, they've sent a lot of entries that I've really liked. Granted, they haven't done very well. :-) But I personally have liked the songs a lot. Still do, of course. :-) Stop (2005), Cvet z juga (2007), last year's Vrag naj vzame, and even Mr Nobody (2006). I know, it's a silly song, but I like it. :-) I also really like that they mostly sing in Slovene. But, as I said, they generally don't do very well. Slovenia has been participating in the contest for a long time - longer than most other Eastern nations. They've been in the contest on their own, competing almost every year, since 1993 ... and even before that, starting from 1961, they competed too, in a way, as part of the now defunct state of Yugoslavia. Their best results have been 7th place ... they've gotten that far twice. Other than that, meh. Middling. Up until the past five years, when they started doing actually badly :-) ... over those five years they have only qualified for the final once. Alas. Here's hoping they'll do better this year, because I really like Slovenia. :-)

Their entry this year is a bit unusual in that it's mostly instrumental. But that may be a smart move. The most recent of Norway's two victories, in 1995, was almost entirely instrumental. I say almost, because a song can't compete in the ESC without some lyrics. An entry that really was 100% instrumental would be disqualified. Sweden did in fact try to have us disqualified in -95 - yes, really! - but the EBU came to the conclusion that the few words of lyrics that the song has (25 in the original, 30 in the English version) were sufficient. So yay us. :-) Slovenia's entry for Moscow has more words than Nocturne did, but it's mostly repetitions of the same verse. They are sung by a pretty girl (Martina Majerle) while a string quartet (Quartissimo, of course) play a melody that blends pop and classical elements into something that I in fact quite like. I'm very unsure, though, of how this will go down in Moscow. It may do well and it may bomb ... I have to say I think it's hard to tell. o_O What it does have going for it is that it's unusual and will be remembered. The performance in the national final was quite striking and people may find it rather entertaining ... if they don't change it, of course. Alternatively the audience may think it's silly. I really can't say- if I have to make a guess I will say that I think it will do relatively well. It's different from the typical ESC entry, and so is memorable and entertaining just for that. And it's a catchy and, by ESC standards, innovative melody. The best of luck to Slovenia on May 14th. :-)

This is Quartissimo featuring Martina Majerle performing Love Symphony by Andrej Babić and Aleksandar Valenčić who will be competing for Slovenia.

Lyrics, such as they are, here.

I like it but don't love it! And I'm not sure how it will go in Russia. I think it's up to the presentation!

Yeah, the presentation could make or break this song. They only have a so-so slot ... #10 ... but if they have a memorable presentation the audience will probably remember it.