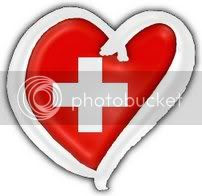 Can I just copy my comments from the post on the Macedonian entry?

A rock/pop tune with nothing wrong with it and nothing much to distinguish it. Easily heard and easily forgotten. The Swiss entry last year was so fantastic - I loved it - unfortunately they didn't do very well, didn't even get through from the semi. Too bad. I think they would have done much better with that song this year, considering the jury votes. But that's water under the bridge and no point considering. I don't see them getting very far this year. Not because the song itself is bad, but because it's such a standard song, no hook, nothing special. Everyone in the audience and in the juries will have heard this so many times before. I have nothing bad to say against it, but I don't really remember it either.

The video's OK, it has some kind of original elements. Compared to the Bulgarian video it's a masterpiece. >:-) The lyrics though are pretty stupid. Bad Engrish.

This is The Lovebugs performing The Highest Heights by Florian Senn, Thomas Rechberger and Adrian Sieber (who I think are some of the band members, but don't hold me to that) ... they will be competing for Switzerland as #8 on May 12th.

I like Switzerland this year but not as much as their 2008 entry!
Hope it goes well.
May I add that the singer is HOT!!!