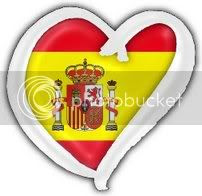 Now what did I just say about the Portuguese entry - that it seemed kind of old-fashioned ... ? I feel kind of the same way about this entry. But not really. :-) I guess what I mean is that even though it's modern and current and all that, whatever, I feel like I've heard it a hundred times. And I probably have. There is kind of a Spanish beat to it that I do like. And it's catchy ... at least while I'm listening to it. But it's just not that special. There are other songs this year that have much more personality and also the qualities that this song has.

The singer's pretty good ... her voice isn't bad, and of course a hot young blonde in a crotch-length silver dress is a tried and tested gimmick. ;-) The dancers slash presentation ... kind of cheesy. I like the switch between the chorus and the verse in this song. Hm. It kind of grows on me. But.

The chance to have their song grow on the audience is something that Spain just won't get. So I personally, although this is not a bad song in any way, shape or form - it's a perfectly acceptable pop ditty with nothing wrong with it - I'm afraid there will be a number of other entries that will outshine it.

This is Soraya performing La noche es para mi by Jason Gill, Dmitri Stassos, Irini Michas and Felipe Pedroso ... this quartet will be competing for Spain, which, being one of the Big Four (a concept which I plan to explain in a later post) will not have to worry about getting through the semis - and also will not reap any of the advantages of that potential double exposure. :-) They will only take the stage on May 16th, in the final ... and in the best possible slot, #25. Ooh ...

Just saw on facebook that you have gotten one of your friends over to the dark side of ESC, :(, its a sad day

I agree with your assessment; I feel like I've heard this song before, because it sounds so blah. I do like the singer's hair, though. :)

Aw, Paz, all she said was that she thinks the Norwegian entry is good this year. At least that's what she told me ... ? ;-)

I agree, Margo, she does have nice hair. That look really suits her. But she really ought to have had a better song too. ;-)

This is a very catchy song and I have the feeling that it'll go pretty well. The singer is a plus so.... good luck!

It may do pretty well ... It's a good enough song in and of itself. The problem is that I think most of the audience will have heard it umpteen times before, because it's a pretty standard pop song. So I'm not sure that people will remember it much. That's why it's really not a benefit for the Big Four to not have to go through the semis.