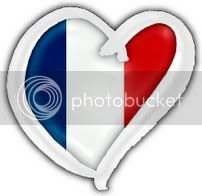 This is my last ESC review this year. (I think I know someone who will be pretty happy about that. ;-) Just think, in two weeks from now it'll all be over ... :-(

But at least as far as my reviews are concerned, we're leaving on a high note. Vive la France!! As far as I'm concerned, there is nothing wrong with this song. Nothing. It's a wonderful song and everything is wonderful. :-) Patricia Kaas of course performs it beautifully. *joy!!*

Of course this song may not necessarily do well. Because it's a slow ballad, people will only hear it once (since France is one of the Big Four) and they have a shitty slot, #2. But it ought to go through the roof. It's a quality entry, and that's even totally understating it. Patricia Kaas is just wonderful ... and they're sure to get lots and lots of votes just because of that, just because it is Patricia Kaas. :-) She has a lot of fans and hopefully a bunch of them will be tuning in on the 16th. Fingers crossed. France had a great song last year, but they bombed ... it was just too weird, I think. This one though is not weird, just great. Kudos to France. In French. :-)

This is Patricia Kaas performing Et s'il fallait le faire, a lovely French chanson by Fred Blondin and Anse Lazio. They will be competing for France on May 16th. The best of luck to them. :-)

Can I congratulate Patricia for translating her Eurovision entry into Esperanto?

I know it's Patricia Kaas and the song is quite ok but I don't think it'll do as well as you think. Good luck anyway! Hope I'm wrong!