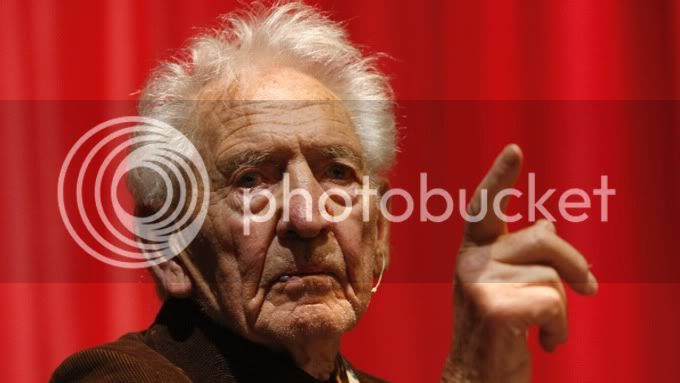 Yeah, I know, it's not a surprise and was bound to happen soon and he had an incredibly full life and so on and so forth. But still, this is so sad!! He was such an amazing person ... !! His life in so many ways embodied Norwegian history in the 20th century. He was the last of the giants. I wish he could have been with us through this year's elections. You know he would have had things to say. :-)

There's both good and bad to be said about Haakon Lie. But he was a giant. He lived an amazing life and Norway would have been a different place without him. There aren't a lot of people that can be said about without hyperbole.

This guy was born in Kristiania. I can't get over that. He campaigned for Labor in 1921. It boggles the mind.

Rest in peace, old man!! You've done your share. Thank you for everything.
posted by Leisha Camden . 8:59 PM

I don't know how to do this at all well so I hope you don't receive two messages from me.

Thank you for writing about Haakon Lie. Is that the way his name would be spelled in Norwegian - or would it be a single "a" with a little "o" over the "a"?

I am an artist working with older Nordic figurative forms to tell new stories. My most recent work is Ran, the Sea Goddess, Tempting Viking Lads which I dedicated to the late Minnesota Icelandic Poet, Bill Holm, who said that: "In the US there is too much religion and not enough gods."

Hi Claire and thanks for your comment - no problem, it went through just fine, and only once. :-)

About Lie's name - the answer to your question is actually both yes and no. :-) Both forms of that name is in use in Norway - Haakon and Håkon. The former is more archaic, and may also be considered to be more posh. Both forms have the same pronunciation.

In this particular case though, the spelling was changed at one point. Our now lost giant was given the name Håkon by his parents. As was only to be expected since they were working class ... or not even that, actually, they were dirt poor farmers as far as I know. I think his father was illiterate. Anyway. This is the story as I've heard it: In the early 1940s Lie changed the spelling of his name from Håkon to Haakon - this was to display his patriotism as Norway was under Nazi occupation at that time (as I'm sure you know :-) and he wanted to really show his love for his country. Our king at that time shared his name, but with the old spelling, Haakon VII. He became immensely popular during the war as a symbol of our resistance to the Germans, of the Norwegian will to fight and never give up. Lie too was like that. So he changed his name to honor the king. :-)

Today the royal family use the old spelling - our crown prince is called Haakon Magnus, named after his great-grandfather - but in order to normalize the spelling, the newer version, with the å, is used to refer to the dead kings by this name. Ie number 1 through 7. Haakon Magnus will be king Haakon VIII, and out of respect that spelling will be used during his lifetime. But when he dies he will be referred to as Håkon VIII.