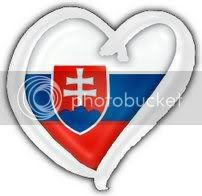 Woo-hoo, Slovakia!! :-D How cool is it that they are competing again this year. :-) I was so surprised to see them on the list of competing nations, I had to do a double take to make sure I'd really seen it. :-) They have only participated four times so far, and the last time was in 1998. I'd basically written them off as not interested ever again. But obviously one should never say never.

And how great is it that not only are they competing again, but they're sending a wonderful song! :-) I really dig this song, it's one of my top favorites this year. Another ballad - this is a major year for ballads; gee, I wonder why ;-) - but a very dramatic one, and performed with such emotion! O ! I dig this! It's not quite up there with Rändajad, but it's not that far behind. Me like!! I can't really put my finger on it but I really like this entry. :-) It'll probably bomb :-D but I like it a lot. I think they deserve to do well for returning to the contest with such a classy entry.

I like her voice a lot ... his isn't as good, but it works well enough with the song. And they put a lot into the performance. ;-) Oh, and they're singing in Slovak, another plus. Kudos. :-)

The presentation is a little cheesy, what with the candles on the piano and what not, but I guess you can't have everything. It'll be interesting to see how they do it in Moscow. And the outfits. Ooh, I'm looking forward to seeing this one. :-)

This is Kamil Mikulčík and Nela Pocisková performing Leť tmou by Rastislav Dubovský, Petronela Kolevská and Anna Žigová. This talented trio will be competing for Slovakia on May 14th. So I can vote for them, yay. :-D

Too much of a ballad for me! Nothing special just listenable. I doubt it'll go through. Sorry!!!