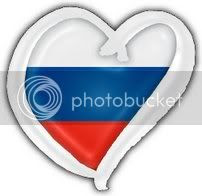 Ah, Russia - last year's unsurprising winner and this year's proud host. And I'm sure they'll do a great job of hosting and give us an amazing show. The stage looks absolutely fantastic. I can hardly wait. :-)

Their song this year though doesn't get me very worked up. It's kind of a power ballad ... ie not entirely different from their 2008 entry. But nowhere near as good though. It doesn't have the catchiness, it's very anonymous in comparison with Believe. There is a difference between the verse and the chorus that is quite interesting - the chorus is much more catchy - but overall this is too much of a standard pop song to stand out much. It's OK, there's nothing wrong with it, but it's basically bland. I couldn't hum it now if my life depended on it. Sorry, Russia, but you'll have to tune in to a broadcast by some furriners in 2010.

This is Anastasia Prikhodko performing Mamo (which means 'Mom', yeah) by Konstantin Meladze and Diana Golde. They will be competing for Russia on May 16th - as last year's winner Russia is assured a place in the final, and will not have to compete against the rest of us in the semi. Next year though they'll be back among the rabble again. ;-)

A cute girl with not such a good voice and one "nothing special" song makes us a.........
better luck next year Russia!!!
Sorry!

Yeah, I agree, it's nothing special. There are a number of other much more original songs this year, so I don't have high hopes for Russia either. But hey, they're hosting, they shouldn't win anyway. Keep the ESC moving!! :-D